As experts in firmware security, the Binarly team is frequently asked why endpoint solutions can’t detect threats originating below the operating system such as firmware implant payloads. Unfortunately, the problem requires a more complex approach and the modern architecture of Endpoint Detection & Response (EDR) solutions are weak against generic attack patterns.

At Black Hat Europe 2021, Binarly researchers presented several attack vectors that weren't aimed at attacking a single solution, but instead exposed industry-wide problems. The technical details of two new UEFI bootloader-based pieces of malware (FinSpy and ESPecter, which behave similarly to classical bootkits, have been published recently. However, instead of infecting legacy bootstrap code (MBR/VBR), they attack the UEFI-based bootloader to persist below the operating system. These types of threats can influence the kernel-space before all the mitigations apply. This allows an attacker to install kernel-mode implants or rootkit code very early in the boot process. 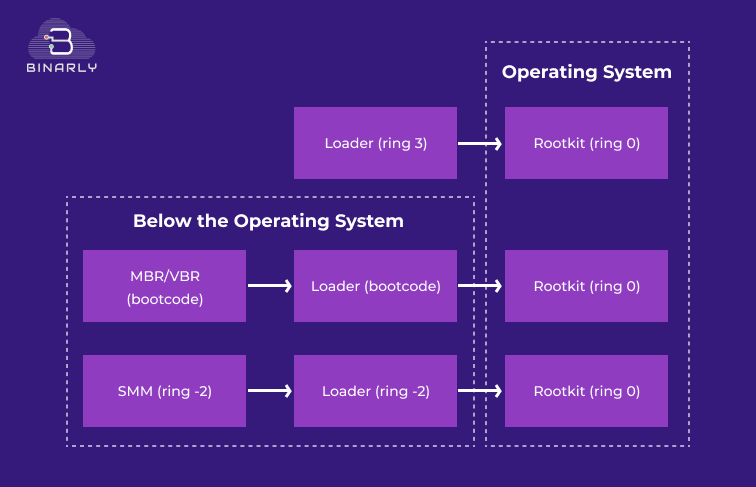 With that in mind, the Binarly research chose to focus on uncovering ETW design problems and uncover attacks that affect all the solutions relying on ETW telemetry. Firmware implants to deliver operating system payloads implementing these attacks will NOT be detected by modern endpoint solutions.

Design issues are the worst

Attacks on ETW can blind a whole class of security solutions that rely on telemetry from ETW. Researching ways to disable ETW is of critical importance given that these attacks can result in disabling the whole class of EDR solutions that rely on ETW for visibility into the host events. Even more important is researching and developing ways to detect if the ETW has been tampered with and notify the security solutions in place.

This topic is very important for all the experts dealing with Windows security, malware detection and incident response.

Event Tracing for Windows (ETW) is a built-in Windows logging mechanism designed to observe and analyze application behavior. ETW was introduced quite a while ago (Windows XP) as a framework implemented in the kernel to troubleshoot OS components behavior and performance issues; since then, it has been expanded and improved significantly - in Windows 11, ETW can produce more than 50,000 event types from about 1,000 providers. 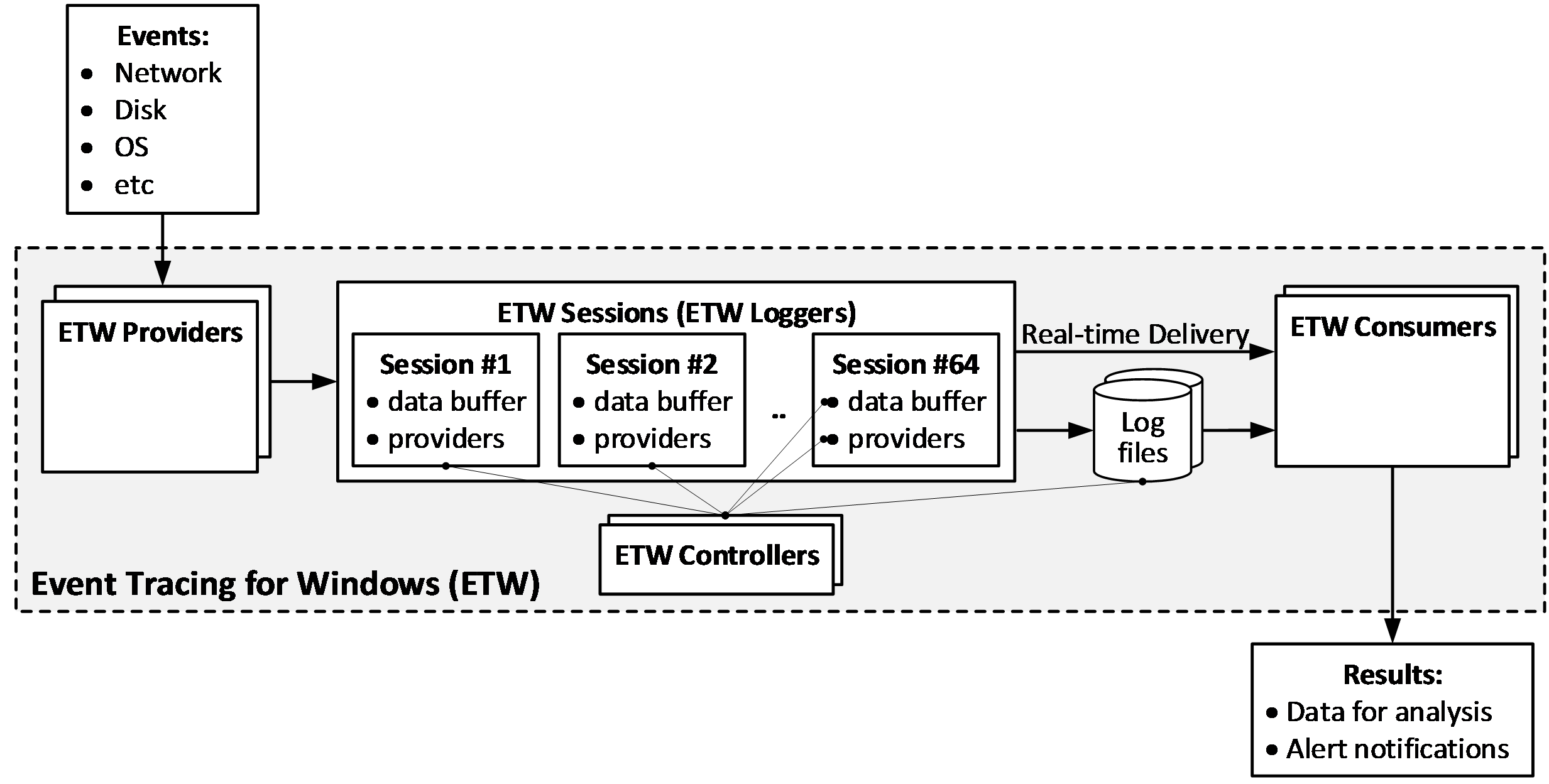 Using ETW to collect host telemetry has the following advantages:

ETW is used to collect events in large-scale business solutions such as Docker, Amazon CloudWatch. MS SQL Server has been using ETW for more than 10 years.

One of the first examples of using ETW-based tools to analyze and reveal malware behavior was presented by Mark Russinovich in his talk “Malware Hunting with the Sysinternals Tools” about 10 years ago. Since then, developers of modern EDRs have leveraged ETW to monitor security related events and successfully detect and respond to cutting-edge malware.

As an example, Process Monitor from the SysInternals suite was leveraging NT Kernel Logger ETW session for network tracing. Its latest version is still relying on ETW for such visibility but a dedicated ETW session, PROCMON TRACE, was introduced. During the Black Hat Europe 2021 talk, the Binarly team demonstrated an ETW attack on Processor Monitor that resulted in blinding the SysInternals tool from any network activity.

There are plenty of practical research projects demonstrating the ability of ETW to capture malicious activity or perform threat research and reverse engineering:

ETW is a hot topic in many academic papers focused mostly on detecting malicious behavior:

According to the MITRE CVE database, in 2021, there is an exponential rise in the number of ETW related vulnerabilities that received a CVE number. So it is safe to assume that ETW has caught the attention of Bug hunters: 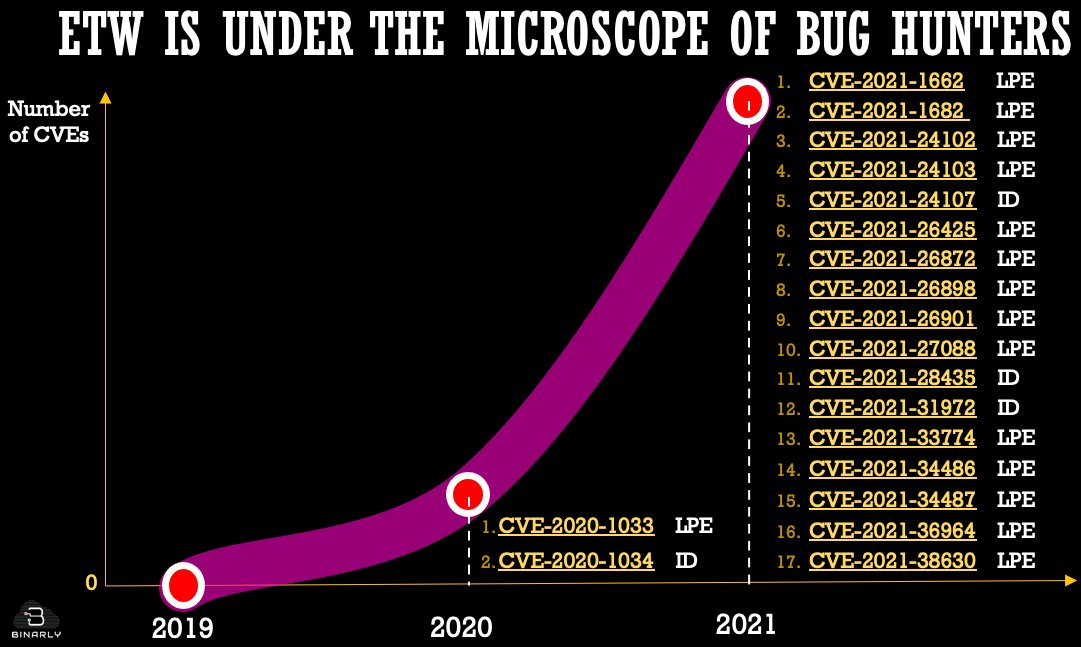 As discussed, ETW is helpful for gathering telemetry to defend against attacks, but it has drawbacks.

One important drawback is that ETW has an opaque structure, including undocumented providers and providers that issue undocumented events - ETW event templates are stored in the PE resource section under WEVT_TEMPLATE resource id.

ETW can be leveraged by living-off-the-land malware:

Unfortunately for the defenders, ETW can be BYPASSED!

Many ways to disable ETW logging are publicly available from passing a TRUE boolean parameter into a nt!EtwpStopTrace function to finding an ETW specific structure and dynamically modifying it or patching ntdll!ETWEventWrite or advapi32!EventWrite to return immediately thus stopping the user-mode loggers.

Over the past several years, there have been many examples of malware families that implemented mitigations to evade ETW-based logging.

MITRE has updated the Defense Evasion category to take into account these attacks by adding a new technique called “Indicator Blocking” as a separate sub-technique to Impair Defenses technique.

The ETW Threat Modeling is presented below:

There are 5 types of attacks, designated by a different color, targeting each component of the ETW architecture:

The Binarly team recapped the most important bypasses publicly available during their Black Hat Europe 2021 talk. The most up-to-date summary of the ETW attacks by category is presented below:

Before introducing a new attack on Process Monitor presented by the Binarly team, let’s talk a bit more about ETW Sessions. An ETW session is a global object identified by a unique name that allows multiple ETW consumers to subscribe and receive events from different ETW providers. To make matters more obfuscated, there is neither API nor documentation on how to identify the session a consumer subscribes to receive events from.

The EtwCheck (it will be released soon, stay tuned) is a powerful tool that can extract various kernel data including the in-memory WMI_LOGGER_CONTEXT structures for the corresponding sessions. These structures contain the sessions Security Descriptors, Flags and PIDs that can help identify the applications that subscribe to these sessions.

NT Kernel Logger session receives telemetry from different providers implemented in the ntoskrnl.exe and OS core drivers. One important key point, which will be leveraged in the attack on Process Monitor, is that Windows supports only one active NT Kernel Logger session at any time but any application with admin privileges can start/stop this session.

Process Monitor is free, and very popular for malware analysis which uses absolutely the same technology as many EDRs. To receive network events Process Monitor launches an ETW session as follows:

From an attacker application, the running session that Processor Monitor relies on is stopped and a fake one is started. As a result, Process Monitor stops receiving network events and relaunching it does not fix the problem. 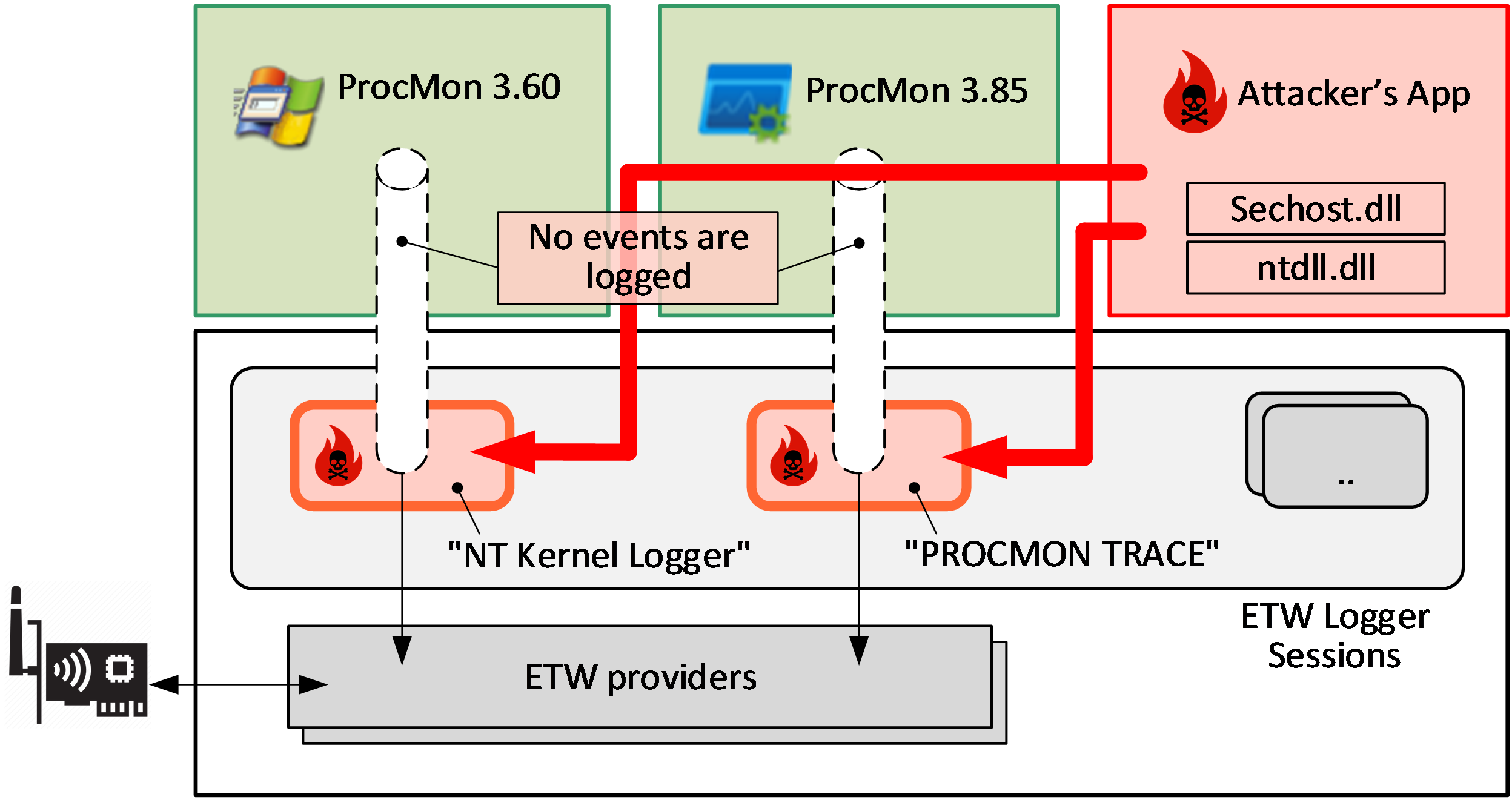 To demonstrate this attack, Binarly team has developed ETW Hijacker (it will be released soon, stay tuned) which functionality is based on the following control flow:

In the second attack introduced during the talk, the targeted application is Windows Defender and its secure ETW sessions:

Security descriptor for DefenderApiLogger in Registry and in the kernel memory

One simple way to blind Windows Defender is to zero out registry values corresponding to its ETW sessions:

Windows provides QueryAllTracesW API to retrieve the properties and statistics for all ETW sessions for which the caller has permissions to query. After calling this function the execution control goes to the kernel and finally to EtwpQueryTrace function (its corresponding pseudocode shown below). As it can be seen in the pseudocode, the EtwpQueryTrace function includes several security checks to prevent returning information about a secure session to unprivileged applications. This is the reason why event apps with admin privileges can’t query the Windows Defender ETW sessions. First, the access rights of the caller are checked by comparing the session security descriptor with the process token. Second, it checks whether the queried session has its SecurityTrace flag set and implement one more check based on the PPL mechanism in the EtwCheckSecurityLoggerAccess function.

By default, users cannot query information about Defender ETW sessions since they are running with high privilege and have SecurityTrace flag enabled. Both session parameters, the security descriptor and SecurityTrace flag, are stored in the WMI_LOGGER_CONTEXT structure.

Malware can load a driver that patches the aforementioned values in the targeted WMI_LOGGER_CONTEXT structure to make the execution flow bypass the security checks and execute EtwpGetLoggerInfoFromContext function.

Now, moving to stopping secure ETW sessions, Windows provides StopTraceW function to stop the specified ETW session. After calling this function the execution control goes to the kernel and finally to EtwpStopTrace function (its corresponding pseudocode shown below). As it can be seen in the pseudocode, the EtwpStopTrace function includes several security checks to prevent stopping the targeted secure session by unprivileged applications. This is the reason why even apps with admin privileges can’t stop the Windows Defender ETW sessions. First, the session “stoppable” characteristics is checked by querying the LoggerMode field in the WMI_LOGGER_CONTEXT structure. Second, the access rights of the caller are checked by comparing the session security descriptor with the process token.

By default, users cannot stop the Defender ETW sessions since they are running with high privilege and have been marked as non-stoppable. Both session parameters, the security descriptor and LoggerMode field, are stored in the WMI_LOGGER_CONTEXT structure.

Malware can load a driver that patches the aforementioned values in the targeted WMI_LOGGER_CONTEXT structure to make the execution flow bypass the security checks and execute EtwpStopLoggerInstance function.

To summarize the attack to query information about the target secure ETW session and then stop it, a malware driver has to patch three fields in the corresponding WMI_LOGGER_CONTEXT structure in memory.

Summary of the Attack

The demo on querying and stopping the Windows Defender ETW sessions presented during the talk can be found on Binarly YouTube channel.

Windows PatchGuard is a software protection utility designed to forbid the kernel from being patched in order to prevent rootkit infections. However, we can see from the demo that PatchGuard does not protect kernel ETW structures from illegal write access.

To mitigate this risk, MemoryRanger can be used. Memory Ranger is a hypervisor-based utility designed to prevent attacks on kernel memory. After loading, MemoryRanger allocates a default enclave for the OS and previously loaded drivers. MemoryRanger traps the loading of the ETW Blinder driver and moves it to the isolated kernel enclave in run-time with different memory access restrictions. Using Extended Page Table (EPT), MemoryRanger can trap access to the sensitive data and return fake data to the attacker.

The demo on how MemoryRanger can prevent patching the WMI_LOGGER_CONTEXT structure presented at BlackHat Europe 2021 can be found on Binarly YouTube channel.

In conclusion, ETW was originally designed to perform software diagnostics, but nowadays it is widely used by various EDRs and cybersecurity solutions. It is crucial to understand the attacks on ETW because these attacks can disable the whole class of security solutions. During the talk we presented two new attacks on Process Monitor and Windows Defender and introduced two new tools that can help in identifying (EtwCheck) and preventing attacks on ETW (MemoryRanger).

Going on step further, let’s assume that an attack originates in the firmware, sets persistence, executes the next-stage payload to move up in the kernel where it can implement one of the attacks shown in this presentation. This will be devastating, due to its stealth-ness and resilience to OS reinstallation or HDD replacing. That's why, today, security solutions MUST receive signals from below and above the OS to be able to respond effectively to such threats.